And yes, you can forget about driving licenses too. 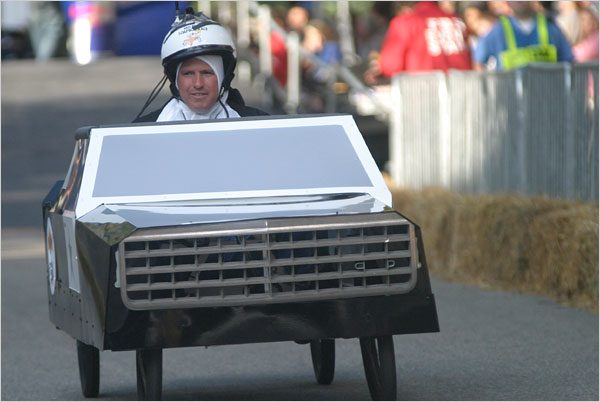 It's not an event about your dream car.

Nor is it a high-class car exhibition.

THE SOAP BOX DERBY event is finally here in SINGAPORE! (Yes, you heard it right!)

What is a Soap Box Derby, you say?
Well... ... You'll be surprised at the long history which dated back to 1934 that began with a popular car race that was held in America.
Initially intended as an activity for the youth, it slowly transitioned into a fun-filled race for all ages.
Different countries around the world soon caught up with the trend and held their own Soap Box Derby races, but there hadn't been any of such large-scaled races in Singapore. (which will soon be no longer the case now.)

Yes, it's a car race BUT imagine this -  you'll be racing YOUR very own D-I-Y car made out of your creativity, and it shall require no fuel to move.
The only "fuel" that shall keep it going is nothing but pure GRAVITY! (What a good way to make use of the scientific nature around us, huh?)

But that's how it's done!

A picture may speak a thousand words, but here's a video that speaks a million words. LOL:

Frankly speaking, aren't you just excited just by reading what I had shown you? (LOL)

I'm sharing this with you is because YOU can have the opportunity to be part of Singapore's VERY first large-scaled Soap Box Derby event, Race Me -organized by Mediacorp- that is going to take place on 2nd September 2012! (Yes, its a Sunday!)

Here are some of my personal favorites that I found in Race Me's Facebook:
(I had a good laugh browsing through the different kinds of creativity that humans can possibly come up with.)

The Soap Box Car - in the form of a comfy toiletbowl. (LOL)
I suppose this guy must've thought of the idea while he was in the toilet brainstorming for ideas. LOL.

Here's a second one that had me doing a double take:

My jaw literally dropped while I stared at the picture. Whoever created this was pure genius. It looks so much like a real car that nobody would've guessed it's only a Soap Box car, made out of a simple kart!
Seriously, I would feel so proud if its me who created this. (HAHAHA)

I got so interested that I decided to do some Googling work to look at more soap box cars.
I mean, aren't they inspiring?

Look at this guy's face. He's all seriousness. (Actually he looks kinda cute with that large helmet that seems to be twice the size of his head.)
Don't play play ah!

On the move, FAST and FURIOUS Red Bull:
Chiooooong aaahh!!~~~~

Soap box cars standing in line, ready to crash....and one of them apparently looked like the front part of an aeroplane! COOL MUCH??!

After looking through these photos, I am sure you would be feeling excited in one way or another.
How about coming out with one of your own and be part of the race with your friends or family?
Not only can you unleash your creativity with the design of the Soap Box car, but you can be sure to enjoy a fun-filled Sunday afternoon with your loved ones and probably emerge as top 3 winners to win attractive cash prizes!

(Hint: Come dress in your best too as there's even an opportunity for you to win $500 for each BEST DRESSED team!)

It's simple. Just gather 3 of your desired friends/family/whoever you like and have them join with you! (Each team will consist of 4 members in total, 1 being the Team Captain, 1 Driver and 2 Assistants)
A chassis will be provided to each team and you can begin creating your very own Soap Box car!

Come transform your chassis into something that's out of the world:
(You can be funny, wacky, etc. Just let your creative juices flow freely!)
Here's an example by The Muttons!

(Picture in courtesy of XIN MSN.)

Click on HERE to be directed to the Registration form.

After the registration process, you can go ahead to brainstorm for your fit-for-a-king design, collect your chassis , build your soap box and finally test it out!
.
.
.
.

Do refer to HERE for the rules and regulations.

And oh, did I mention that there will be our local celebrities participating in the race too?
Here's a heads-up of who you'll be expecting to see crashing the scene:

And our lovely host, Jean Danker!

Even if you aren't participating in the race, you will be able to enjoy the fun by coming down and supporting the 'racers'!
Admissions are free afterall. :)
(Yes, I will be there as well!!)

BUT NO, I am not going to dress like this although I know it's appropriate.
LOL.
This was just a photo that I took during a themed photoshoot with Sam Song. Haha.

If you are interested to know more about the race or to be kept in the loop of updates, do join their Facebook page at:

or log on to the official page on XIN MSN at:

If you've watched Sasuke Singapore on Channel 5 after the NDP yesterday (and feeling tempted to try it), there will be a mini Sasuke held on the day of the event as well!


There are loads of surprises awaiting you on 2nd September 2012 at Singapore Expo Hall 6! Do come and be part of the moment!

I'm definitely getting my camera ready and be back to blog all about it.
For those who are attending, I'll see YOU there!